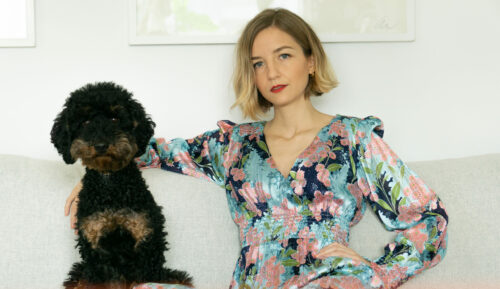 With Theresa “Therry” Langner, the Austrian music business has got a tireless powerful woman who understands her business and wants to share as much of it as possible. After co-founding a label in 2019 that takes artists to the top under the name ASSIM Records, she now also owns her own music agency for management & consulting, MORINOKO. And hard work, as we know, pays off: Therry was chosen as the winner of the MEWEM Golden Ticket in Austria last week. Congratulations!

Therry wasn’t always a typical label employee. Her insight into the music business starts in 2013 at the private radio station Kronehit, where she is a host and slides step by step toward music editorial. Then suddenly, the first contact with labels is made, and her interest in the music industry and its background is awakened: She begins to study music management in Krems – and if you look at her current activities, it probably wasn’t a bad idea. Numerous internships follow, in London at Music Ally, and later at Tileyard. The next step already leads her to a big music publisher: Therry starts working at BMG in Berlin. In addition, she is part of the team of the German TV show “Gute Zeiten, schlechte Zeiten” (GZSZ) and is in charge of the live performances there.

But “Berlin is a tough music place”, as she states herself, and finally decides to return to Austria in 2019. She starts looking for more creative jobs, something where you can really express yourself and contribute ideas – and ends up at the label Seayou Entertainment. Still, that was not the job for eternity, but it is where she meets Ilias Dahiméne as well as the musicians Valentin Eder and Mario Fartacek, with whom she soon founds a record label – ASSIM Records. At the moment, 14 artists and bands are under contract there, and Therry mainly takes care of PR and promotion. She thinks about social media concepts, advertising cooperations, and entertaining merch ideas and tries to get the maximum out of it with a lot of effort and creativity. “With our very first band released on ASSIM Records, NEON NEET, I went into every single clothing store on Mariahilfer Straße in Vienna and asked who was responsible for the in-store playlists and if they could listen to NEON NEET’s songs,” she says.

The fact that she has recently started her own music agency, MORINOKO, where she manages and advises artists, is a result of her previous experience at ASSIM: “With newcomers, you often have to do the management too, because otherwise there won’t be progress. Also, I am a perfectionist. My goal is to accompany each band as well as possible and to build it up sustainably. If there is no management behind, someone has to take care of it – and in this case, it was me. In the end, bands kept approaching me and asking if I would like to manage them as well.” At first, Therry wasn’t sure whether she was capable of this task. A decisive turning point was her participation as a mentor at MEWEM Europe, as she explains: “Especially the meeting with the other mentors in Berlin has strengthened me a lot and eliminated my self-doubt. That’s when I came home and was sure that I would now additionally start something of my own. But without the MEWEM program, I would never have had the confidence to do that.”

With her two projects ASSIM Records and MORINOKO, Therry is now moving forward with high ambitions: Soon she would like to raise the popularity of the bands outside Germany, Austria, and Switzerland. The next target countries are France and Great Britain, eventually also the USA and Canada. Especially the agency MORINOKO is currently in focus with its development phase, a lot of things are coming, she says. Will we hear about other projects in the future? In any case, Therry knows no limits when it comes to her work and goals.