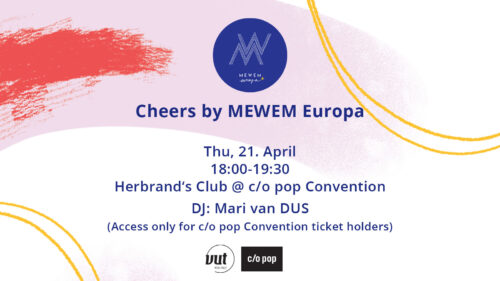 MEWEM Europa says hello! Come and network with mentors, mentees and the makers of MEWEM Europa!

MEWEM Europa is a project that promotes women’s access to to management positions and entrepreneurship as well as the development of management skills among young women in the music business. In the framework of MEWEM Europa, mentoring programmes for women in the music industry have taken place in the six participating countries Belgium, Austria, France, Spain, Romania and Germany in the last months. Mentors and mentees as well as representatives of some of the MEWEM partner organisations will be present and are looking forward to networking with you!

MEWEM Europa is a project carried out with the support of the Creative Europe Programme. MEWEM Germany is additionally funded by the Initiative Musik.

Current studies underline the striking importance of role models for the personal development of women in particular. That is where mentoring programmes come in, bringing together newcomers with specialists from the music business whose expertise, visibility and networking affinity clearly turns them into the role models that are so necessary in our sector.

MEWEM Europa is a project to implement and manage mentoring programmes for women in the music business on a European scale. The project’s goal is that in the future, more women will also shape the sector in leadership positions and as founders. Therefore, the project promotes access to management positions and entrepreneurship as well as the development of management skills among young women in the music business.

Mentors, mentees as well as project managers from different MEWEM partner countries report on their experiences in the current programmes and reflect on future developments.