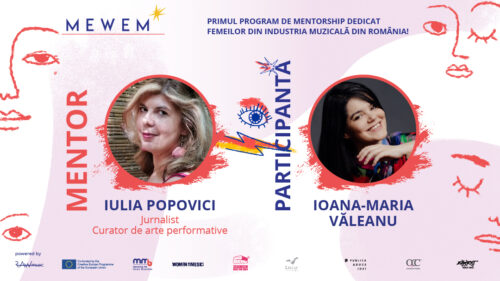 Iulia Popovici is a performing arts critic and curator based in Bucharest. She is also an expert for Romanian and EU cultural programmes. In 2016, she was counsellor to the Romanian minister of Culture.

She has published extensively about the alternative performing arts scene, collectives and artists in Romania and Eastern Europe, the social challenges of contemporary arts and the shifting in working practices. She is one of the founders of ATIC (Association of Trans-sectorial Independent Cultural Workers), an advocacy organisation also offering tax and legal support to self-employed cultural workers.

In 2011-2018, she was co-curator of the Independent Performing Arts Platform (Temps d’Images Festival, Cluj). She has curated a number of showcases and programmes of independent performing arts in Romania and abroad.

Born in 1993, in Ploiești, Ioana Văleanu grew up in a family of musicians. At the age of 7, she began to study the piano, and at the age of 11, she became acquainted with the fascinating world of percussion instruments. She won awards, gave recitals and concerts, her talent having been appreciated by many personalities of the music world. She is a graduate of the “Niccolo Piccinni” Conservatory in Bari, Italy – a class of Prof. Filippo Lattanzi. She participated in Masterclasses with famous percussionists such as Vassilena Serafimova, Mark Braafhart, Pedro Carneiro, Raymond Curfs, Nuno Aroso, etc.

Since 2015, she has been a member of the Romanian Youth Orchestra, with whom she performed on stages such as the Paris Philharmonic, the Elbphilharmonie Hamburg, the Konzerthaus Berlin, the Musikverein Vienna, etc. She also collaborated constantly with numerous orchestras in Romania, among which we mention the National Radio Orchestra, the Sibiu State Philharmonic, the “Mihail Jora” Bacău Philharmonic.

Since 2016, she has been an employee of the “Paul Constantinescu” Ploiești Philharmonic, and since 2021 she has been the vice-president of the Sync Association, a cultural association that deals with the support and encouragement of young musicians in the field of classical music in Romania.