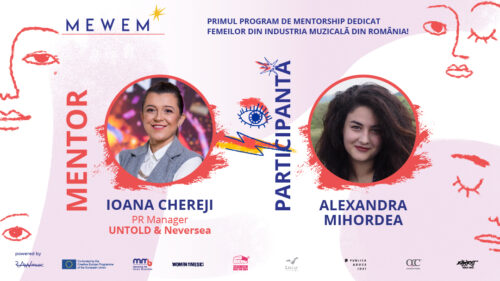 Ioana is passionate about people and their beautiful stories, about journalism and communication. Shortly after graduating from the Faculty of Journalism, she became part of the PRO TV News team. For almost 9 years, she had been a reporter for PRO TV Cluj-Napoca, reporting pleasant and less pleasant events. Being part of the PRO TV team was an important lesson, professionally and personally speaking,  for having discovered a lot of people with beautiful stories, through various projects such as –  Save beautiful Romania – Houses have souls.

She is also passionate about music, that is why, in 2016, she decided to join the team of a festival known around the world, UNTOLD. Currently, she is PR Manager for two of the biggest festivals in Romania, UNTOLD and Neversea.

Alexandra is a person who understood and embraced as a young woman her passion for music, communication sciences, and the importance of female representation in cultural industries. Therefore, since she wants to become a PR in the music industry, she started with the bachelor’s degree in communication program of the University of Bucharest, and now she has enrolled in the MEWEM program, which she considers the next step in fulfilling her dream and the beginning of her career.

At the beginning of 2018, she took her first steps in PR as an intern, at the Noblesse Palace, in Bucharest, where she dealt with the company’s press releases, envisioned corporate and “social nights” type concepts, created content for the company’s website, was in charge of prospecting the events market, promoted the clients’ events and offered help in organizing the cultural events within the palace, such as Fusion Arts Festival or Noble Drinks & Networking Event, Edition 10. From the end of 2018, until 2020, she was a PR and Digital Marketing Assistant for a company organizing concerts and music festivals – Doors Events – in Constanța. Here she provided content on Social Media platforms, was responsible for online advertising campaigns, updated websites, helped organize and coordinate the sponsorship map of the Out of Doors Fest 2019 festival, coordinated with the graphic designer the visual identity of the concert posters  and the Out of Doors festival and helped organize the events.

Since her passion for art and music has always been present in her life, among the activities she has always embraced are theater, interactive theater for children, dance, collecting vinyl records, and analyzing new appearances in music, internationally and nationally. In addition, she volunteered and got involved in the access and backstage departments of the Metalhead division and of the Promusic Events company, which organized and still organizes concerts in Bucharest.