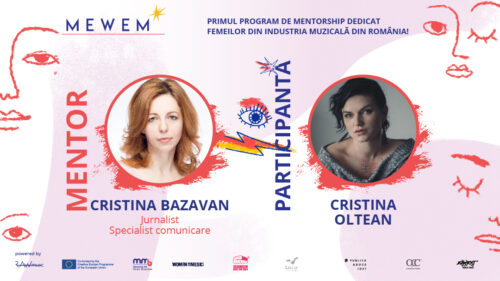 Starting April 2005 till May 2011 she was one of the key-people at Tabu magazine as its Editor in chief. She prides herself with interviewing a wide range of important cultural figures such as: Steve McCurry, Milla Jovovich, Ziggy Marley, Guilermo Arriaga, Rebecca Miller, Gilbert Adair, Milos Forman, Miles Aldrige, Eugenio Recuenco, Olga Kurylenko, Margaret Atwood, Annie Proulx, Victoria Abril or Vanessa Redgrave.

Before Tabu, she worked 12 years for the radio. She became known in the media as one of the powerful voices at Europe FM, the leading national private radio station in Romania at present. She was part of the team that created the Europa FM brand, achieving a unique performance in Europe: the radio station went number one nationally in six months from it’s launching on the market, this being the most spectacular success of any radio station in Europe. In the late 90’s, she was also part of the team that rebranded Radio 21 and she was a marketing consultant for Radio Guerrilla’s launch. She was the presenter for the “Ca-n Filme” first season (Digi 24 Tv). She gives trainings of personal branding for actors, at TIFF, as part of the project “10 for film”. She also  has designed communication strategies for several Romanian actors and directors. For almost two years (2013-2014) she was part of the communication team for VUNK rock band where she contributed to designing and implementing the project „Orasul Minunilor” (City of Wonder), the only communication campaign in the entertainment industry to receive an award at Romanian PR Awards. She worked as Social Media Coordinator of The Sibiu International Theatre Festival during 2012 -2014.

She is a frequent speaker for national conferences on issues regarding women, media, personal branding or online industry.

Cristina Oltean is a music and portrait photographer at www.elegantlytasted.com. As a favorite branch, she would certainly choose concert photography. It is the place where she managed to combine her love for music with photography and at the same time, she sees it as a way of giving back at least a little of what she receives through the music of the artists she photographs.

She lived in London for 8 years, where she had her first direct contact with the music industry working with a London band, doing a little of everything – management, booking, PR, Social Media. She got from this episode her love for PR and social media, where she constantly tried to learn and grow. Also in London, she started a small Virtual Assistance business for artists, which later came to include small businesses.

In Romania, since 2016, she has been following the same path of PR & Social Media for creative industries – such as handmade businesses – and she discovered photography, while trying to present as realistically as possible the products made by customers.

At the moment, she has a photo studio in Bucharest, a great passion for Instagram and Social Media in general, and some ideas about how she could bring in online the atmosphere and the feelings she has while attending a concert.